A list of memes used on Pharyngula, either by PZ or in the comments. Please feel free to add more, links to usage on the blog is a plus.

Main article Ad hominem. This meme is of course not exclusive to Pharyngula. But due to its frequent misuse, it is included here.

This stuff. Everyone loves it. Well, mostly everyone. Available in a surprising array of delivery mechanisms, and generally the source of its own memes, including baconcat.

A derisive term, the latter word which means roughly "a person with diarrhea of the mouth". Originally used by PZ to refer to accomodationist philosopher Michael Ruse, who in turn took offense and missed most of the actual criticism levied at him.

Based on a gross misunderstanding of evolution by used up child actor and Ray Comfort sidekick (yep, that's sad) Kirk Cameron. Cameron mistakenly thinks common descent means you can find the intermediary form between any two creatures. He points to the absence of a 'crocoduck' (a half-crocodile, half-duck animal) as evidence against evolution.

Proponents of evolution generally find this incredibly silly, even for a creationist. Richard Dawkins and PZ Myers each own a necktie patterned with crocoducks, and often wear them to atheist/skeptic conventions.

Cyberpistol is the weapon used by atheist brigands to rob trucks trundling down the tubes of the internet. First mentioned by Thomas Foley, calling for increased security at the Republican National Convention because he believed that PZ had "loaded a cyberpistol and he's cocked it and he's left it on the table".

May be used to illustrate a troll's self delusion, or to humiliate a Chopra troll. Originated on a "Why I am an Atheist" thread, where a spiritual/quantum troll engaged a commenter, who mentioned that the troll's forthcoming definition of "spiritual" would make good manure for his tomatoes. The troll proceeded to note that his definition would burn his tomatoes. The commenterasked if that meant if his ideas were undiluted dog urine. Through further discussion, the concept of quantum tomatoes arose as a means of humiliating the troll.

"Fuckin' Magnets, How Do They Work?"[edit | edit source]

This meme is known broadly on the internets: http://knowyourmeme.com/memes/fcking-magnets-how-do-they-work

Everyone wants Gay Sex (also Ghey Secks) with Brownian. This was first pointed out here by a Troll who appeared offended by discussion of global warming and suggested that Mattir and Brownian should have some.

All commenters want this. Yes, everyone. Everywhere. Some of them may not know it yet, but they do. There is a long line and much paperwork to fill out.

Also, regardless of your genitalia, sex with Brownian is gay sex. This miracle is not yet explained, but current conjecture is that Brownian is, in fact, of the rare 11th sex predicted by string theory. Plus, of course, there are No Women on Pharyngula.

"Get in the Feckin' Sack"[edit | edit source]

This comes from a remark made by Irish comedian Dara O'Briain during a standup comedy act. "Right now I'd take homeopaths and I'd put them in a big sack with psychics, astrologers and priests and I'd close the top of the sack with string and I'd hit them all with sticks...Get in the feckin' sack." The remarks start at 2:20 on this YouTube video. 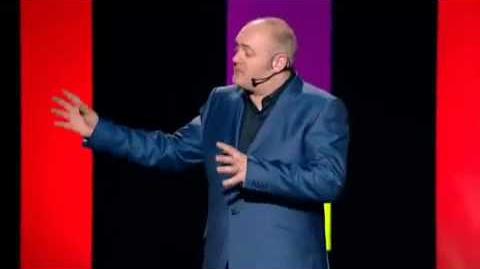 The concept seems to come from folklore, where stories recount evildoers punished and murderers foiled when they are lured into a sack and beaten.

A moon-sized, thread orbiting space station capable of projecting, via a scary laser beam, overwhelming, apocalyptic amounts of various things into a thread. Discharges of LOLcats, tardigrade incinerating radiation, logical arguments, and facts have been observed. Built by A. R during the second incarnation of The Zombie Thread to suppress a local insurrection, it has since seen limited use on other threads.

Something you shouldn't have on your t-shirt if you're planning to visit the The Creation “Museum”:

As the majority of Pharyngulites only possess clothing depicting nude lesbians using holy texts as masturbatory aids, many had to purchase new items.

The action of clutching one's pearl necklace to one's chest, in response to some vulgar miscreant using (gasp) rude language, or (sits down feeling faint) speaking ill of the religious.

Pfft! of all knowledge[edit | edit source]

A name for the font of all human knowledge, also known as that other Wiki. This wiki calls itself jokingly "the Pfft! of some knowledge".

It's not clear where this phrase originated exactly, but its usage seems to be restricted to the science and skeptics blogosphere. One of the earliest comments spotted using this term was a comment by blf in Dispatches from the Creation War [4].

You can vary the number of Fs as you like, though there must be at least two. The exclamation mark is optional.

"You can call me a poopyhead all you want..." (source)

The preferred animal for ill-received commenters to be urged to introduce, usually decaying and sometimes sideways, into their orifice of choice. Originated here.

There has been some discussion about alternatives to intracavitary self-porcupination. Wearing a crown of porcupines symbolizes persecution and imminent martyrdom in the lands of Pontius PZ.

Inspired by a creationist here. Usage is flexible, as with many such phrases. Generally, if you need a comically bizarre non sequitur—especially in a parody of a tinfoil hatter's word salad—a challenge referencing this phrase, and possibly starting 'If you doubt this is possible...', is a nice, traditional choice.

Raptor Jesus is a widely known internet meme consisting of a raptor's head crudely photoshopped onto any picture of Jesus.

The second coming of Raptor Jesus actually occurred last Thursday. Many were expecting a massive Earth shattering event to announce His presence but instead He arrived on United Airlines Flight 47 to Dulles. He has not yet rendered judgment on the sinners of the world but instead is sitting in His basement eating Ramen, contemplating the fate of the world, and spinning a dreidel.

An interjection of mock astonishment and offense over something unremarkable. See: Shock Horror

Originated as a typo for "shiny," here.

A punishment or reward—this depends somewhat on context and upon what works for you—occasionally offered, requested, and/or threatened to and/or by Pharyngulites for various infractions and/or notable moments of win. Frequently (but not exclusively) in the Endless Thread. Patricia (OM) is proprietress.

- To completely lose it and then go on a long, bizarre rant especially: doing all this over a trivial matter.

(e.g, The video of the newscaster starfarting on air after someone mispronounced his name surfaced on YouTube and became quite popular. - New York Times)

An anagram, devised by someone in the blog's comments, of Answers In Genesis, a Young-Earth Creationist ministry. Used substitutively, it alludes to an in-joke that the organisation's founder, Ken Ham, is a pig. (example here)

Self-explanatory reference to cephalopods, the unofficial mascots of Pharyngula. Anything with tentacles is generally considered lovable, sexy, and possibly destined for world domination.

Pharyngulites often greet themselves with a clenched tentacle salute.

The god/goddess of typographical erors. Screwing up your spelling is not a mistake, it is merely paying homage to Tpyos.

A term used by PZ to refer to his wife, inspired by a creationist screed about how scientists like PZ live a life of luxury, driving expensive cars and taking long vacations with their trophy wives. (source)

Sometimes interpreted as sexism on PZ's part by newcomers who don't know the backstory.

Your Concern Is Noted[edit | edit source]

If concern trolls infest a Pharyngula thread it's considered polite to warn them before inviting them to do indecent things with decayed porcupines. This warning generally takes the form of quoting the troll and writing: "Your concern is noted." The phrase originated with the Beware the Believers video: "We appreciate your concern. It is noted, and stupid."

Retrieved from "https://pharyngula.fandom.com/wiki/Memes?oldid=10754"
Community content is available under CC-BY-SA unless otherwise noted.